Ashinoa is krautrock dementia that fans of the genre will recognize.

An artistic atavism in the footsteps of the Post-Stockhausen generation, a kind of round table of geniuses like Klaus Dinger (Kraftwerk, Neu!), Edgar Froese (Tangerine Dream), Schulze (Ash Ra Tempel)… but also Kosmische Musik of modern times, with a touch of electronic influences in the most experimental way you can think of.

Ashinoa is part of the collective Misère Records from Lyon, which also includes the bands Abschaum (who released its first album in late 2017 on Macadam Mambo) and Pratos, Ashinoa started at the end of 2015 and occupes a special place in the Lyon alternative scene.

The Gesamtkunstwerk is a live set concept in which the musicians alternate on stage creating a floating cloud of seamless transitions between the three bands´ extensive catalogue and a fair amount of new and unreleased material.

Hang Collective creates an idiosyncratic, transgressive soundscape in which drony synth passages lead way to fuzzed out psych jams in a search for a common thread between the long-time associated projects.

Tickets available at the Entry 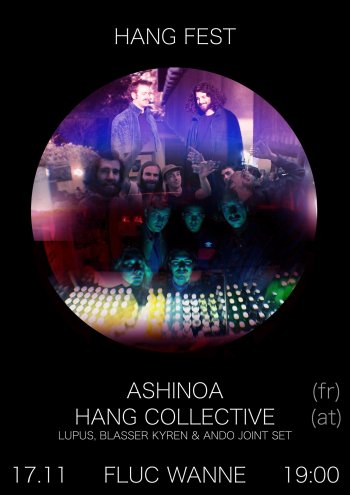